Did I mention that it’s total soup weather over here? Because it really, really is.

I told you guys earlier how much I love soup. I still haven’t gotten around to cooking 44 clove garlic soup but it will be happening soon. Maybe by my birthday? It’s coming up. Maybe that’s why I love winter so much, it’s my birth season. I was born smack bang in the middle of winter. 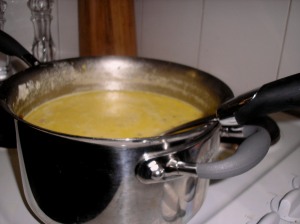 Although I know people who were born in summer who hate the heat and people who were winter babies who spend the season in a grumpy daze. But hey, why worry about the whys and wherefores, when it’s winter outside, the fire is blazing, the blood is pumping, the mist is rising… It is such beautiful weather in Melbourne! I love it when the sun rises through the mist. Because we live in the hills, you can see so much more and it is just amazing.

I’ve never been ice skating before. I’m scared I might fall on my butt. Tailbone accidents are never fun. We used to have a bunk bed… well, we still have one at the family home, and me and my sister used it. I was heading down the ladder from the top bunk and the door and the bed were positioned in such a way that the door opened towards the ladder. I sat on the doorknob by accident, quite hard, and whacked my tail bone. That was no fun at all.

Worse, though, my sister did the same thing but worse. I don’t think she could sit down without a cushion for at least a week. Ouch.

Still, ice skating should be fun. I was going to go a couple of years ago but never got around to it. I only learnt how to ski two years ago and I haven’t been back to the snow since then. I’d love to have a white Christmas at least once in my life.

Chestnuts roasting on an open fire…

Until then, though, I’ll sit on my couch in front of my fire, eating this amazing corn chowder. It’s really, really good. I’ve made corn chowder before, but this one uses cumin. It’s supposed to have fresh corn but I used canned and it was still really nice.

It’s supposed to serve eight and we did get eight servings from it, only five of those were eaten by three people on one night. It’s really nice and it’s perfect for a cold winter’s night when you’re really hungry.

This would be really good for a shared meal. It’s infinitely adaptable – more corn, less potato, more cream, pepper, hot sauce, sour cream… and so easy to make more than the eight servings.

So what are you waiting for?

Adapted from The Essential Vegetarian Cookbook

1 can corn kernels (or canned corn)

3 tablespoons chopped fresh parsley (I didn’t add this bit. It was too cold and dark to wander out to our back porch. But do. It’s a good idea. )

2 tablespoons chopped fresh chives, to garnish (also a good idea that I did not implement. Do not make my mistakes! [make your own, they’re much more fun and sticky to get out of])

Melt the butter in a large, heavy-based saucepan. Add onion and cook until translucent. Add garlic and cumin and cook about a minute; put in stock, bring to the boil, add potatoes, and simmer, uncovered, about 10 minutes. Add corn (both types) and parsley, and simmer another ten minutes.

Stir in cheese, cream and salt and pepper to taste, and turn off heat. Stir until cheese is melted. Garnish with chives.