I know that’s a controversial thing to say at this time of year. It’s Christmas! It’s the time for Christmas cake and Christmas pudding, gingerbread, shortbread and mailing cards to your relatives. I just wrote recipes instead of relatives. (I totally just almost did it again. Whoops! I’m not distracted at all!)

Fruitcake should be a great idea, but I just can’t get into it.

Jim Gaffigan perfectly expresses my feelings on this matter.

So when my housemates proposed a Christmas party in four days time, I decided to make a cake more than 5% of the attendees would enjoy eating. Unfortunately, by the time the cake was cut not that many people were still hungry. But it was pretty! My housemate has a Wilton cake decorating kit. I had so much fun playing with it. (I would love to own one, but having a housemate who owns one is close enough). 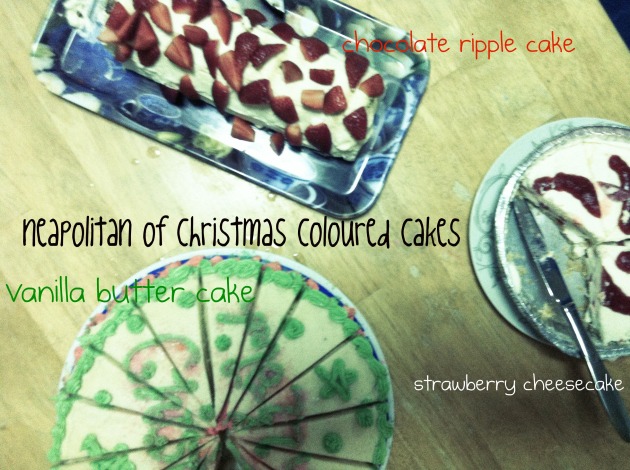 I kinda went a bit crazy on the sweets for the party. Especially considering that there was already going to be hedgehog, white christmas, rum balls (without rum) AND chocolate ripple cake – here comes santa hat brownies, ninja bread men and vanilla cake.

From Sweetapolita, no less.

So if you’re not a fan of Christmas cake, or you just want to try making a classic vanilla layer cake, give this one a whirl. Trust me, it’s worth it. 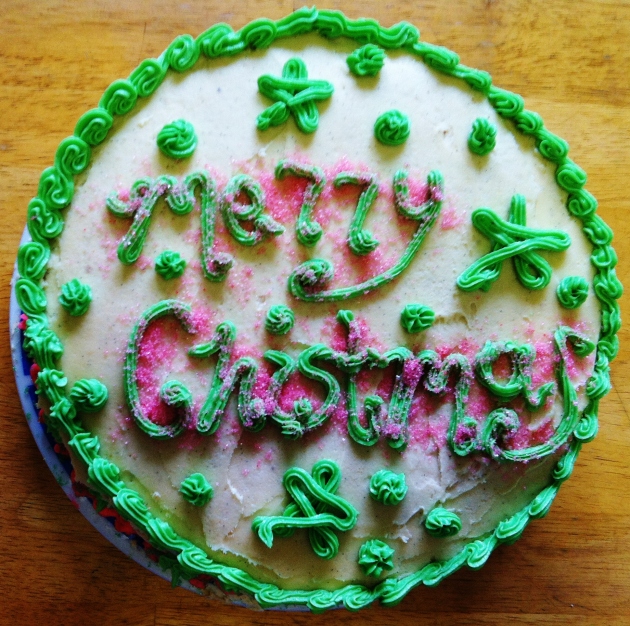 This yields three 8 inch layers or 2 ten inch layers, which is how many I made, because I have one ten inch cake pan, and no eight inchers.

Preheat oven to 180°C and place a rack in the top third of the oven. Grease three eight inch cake pans (or two ten inch pans) and line the bottoms with baking paper.

Sift the flour, salt and baking powder together in a medium-sized mixing bowl and set aside.

Beat the butter until soft. Add 1 1/2 cups sugar and beat until fluffy. Beat in the egg yolks one at a time, then the vanilla essence. Mix in the flour mixture in thirds, interspersed with the milk.

In a clean bowl with clean beaters, beat the egg whites until foamy. Add the cream of tartar and beat until soft peaks form. While beating, gradually add 1/2 cup sugar until stiff and glossy.

Fold about a third of the whites into the cake mix until just incorporated (it’ll take a little coaxing). Fold the rest of the whites in, carefully, only just until it all comes together.

Divide the mixture evenly between the pans and smooth the tops. Bake for 20-25 minutes for eight inchers, 30-35 for ten inchers, until a cake tester comes out clean.

Cool in pans for about ten minutes, then carefully invert onto wire racks, turning the cakes so they rest on their flat bottoms.

Cool completely before filling and frosting. You can also wrap them in plastic wrap so they’re airtight and freeze for about an hour to make it easier. Just slice the risen tops so that they’re flat before you freeze them.

Place one layer on your chosen cake stand (or a lazy susan if you have one) and smooth about a cup of frosting to the edges.

Invert the second layer on the top of the first. Smooth a thin layer of frosting all over the cake, making sure that you fill in all the gaps between the two cakes. Refrigerate for about thirty minutes. This makes it easier to frost the second time.

After half an hour, take the cake our and with a small offset spatula, spread a thick layer of frosting all over the cake, smoothing carefully.

I kept about 2/3 cup of frosting aside, divided it in two and tinted one part with red gel colouring and one part with green, then piped the borders and writing and decorations.

3 thoughts on “vanilla cake for christmas”