Last night I made a peach pie. It wasn’t the best-planned of baking adventures, leaving me stranded at midnight with hot pie; this is often how my endeavours turn out, badly plotted and with a less than impressive musical score. With this particular pie, the timer went off while I was in the shower. The shower. I ask you, who decides to have a shower with five minutes to go on the pie timer? Me, apparently.

(And before you get all high-and-mighty on my showering time, that gave me one minute to get ready, leaving me well within 4-minute-showering rules. I’m environmentally conscious. Yep.) 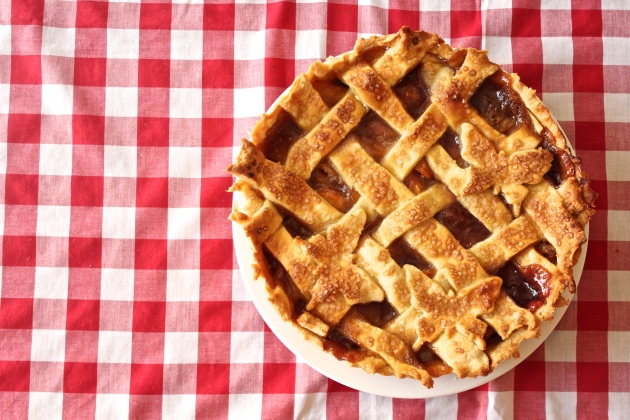 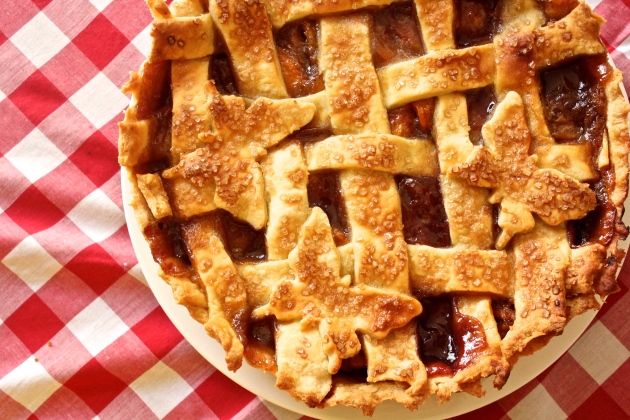 Part of the reason for the lateness of my pie is because earlier in the afternoon-slash-evening, (it’s hard to distinguish when the light stays so late) I decided to make peach pit ice cream, so that took a while. BraveTart told me that peach pit ice cream on peach pie is to die for so I figured, hey, why the hell not? It’s Sunday tomorrow, I can stay up all night if I need to. 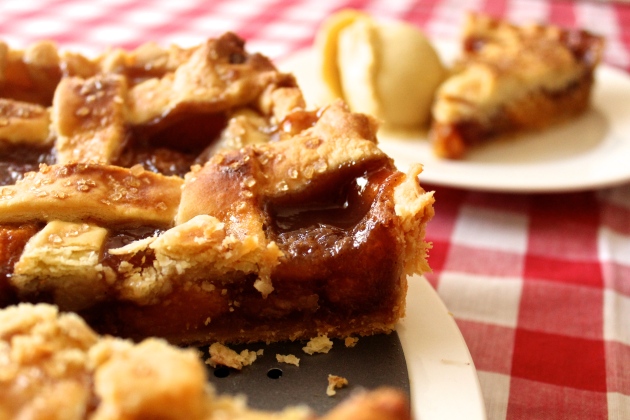 Place flour, butter and salt in a food processor and pulse until it resembles breadcrumbs. With the processor running. Pour in about 1/4 cup of ice water. Keep adding water until the mixture collects into a ball of dough. Dump it all out and collect it into two roughly similar sized balls. Wrap them in clingwrap and refrigerate for at least half an hour.

Peel the peaches. I sliced mine into pieces and froze them, then dunked them in hot water and then ice water, which made the skin come right off. You can also slice a small x in the bottom of the whole peaches, poach them in boiling water for two minutes, then dunk them in ice water and slip the skins off. If neither of these options work, use a paring knife.

Slice the peaches into eighths and toss with the lemon juice. In a small bowl, mix together the sugars, cinnamon and cornflour. Toss with the peach mixture.

Roll out one of the discs of dough to fit your pie pan. I used a 22 cm fluted removable bottom tart pan. You can also use a standard pie dish. (This option is probably better for minimising mess when you slice the pie. Oh, well.) Spray your dish with canola spray, then gently fold your dough into quarters, arrange it to fit a quarter of your dish, then unfold to fill the dish. Voila, the perfect unbroken pie dough! Make sure it’s moulded to the dish. Tip the peach mixture in.

To make a lattice top, roll out the other dough disc into a large rectangle, ideally as long as your pie dish’s circumference. Slice it into one inch thick slices. Place four or five strips one way across your pie top. Lift every second one up and place a strip perpendicular to them. Continue, lifting alternate strips, until the pie is covered. Trim the excess, roll it out and cut out some pretty butterflies for the top (optional.)

Brush the pie with milk and scatter coarse sugar over. Bake in preheated oven for 20 mins, then lower heat to 375°F/190°C and bake a further 30-40 mins. Serve warm, with peach pit ice cream.

Place the milk, cream, peach pits and vanilla bean in a medium saucepan. Bring to the boil,  then shut off the heat and cover, leaving to steep. Overnight is best, but if you don’t have the time, two hours at least.

Bring the milk mixture back to a simmer and fish out the pits and bean, making sure to scrape out the goo from the middle of the vanilla bean.

Whisk the yolks, sugar and salt together in a medium sized bowl. Whisk a little of the hot milk mixture in at a time, until the mix is hot and liquidy. Pour the milk and egg mixture back into the saucepan with the rest of the milk and stir constantly (so as not to curdle) with a wooden spoon over low heat. You want the mixture to thicken considerably, until it coats the back of the spoon. This may take up to half an hour. Shut off the heat and strain the liquid. Refrigerate overnight and process in your ice cream machine as per manufacturer’s instructions.

One thought on “peach pie and ice cream”