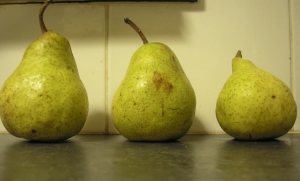 In a time when I’m inundated with stuff to do (my to do lists are numerous and scarily interconnected, like one to do list spawns another and another. For example, Uni stuff. Then, Study and Work On Assignments. Then, I work unit by unit, prioritising by when I’m going to have that class or when that particular assessment is due, counterbalanced by what’s easiest or more fun. And we move on to my other to do stuff, long term and short term – I make lists when I’m stressed. And some of those lists may have to do with 1) why I’m stressed and 2) what I can do [will do, should do] to become destressed.) I can’t believe I digressed so easily already, so when I have so much stuff to do, I want to bake and I want to cook and I want to write for you (and for me, it’s more about me than you at this moment in time, sorry) SO MANY PARENTHESES, I’M SORRY! when I do cook it kinda has to be simple. 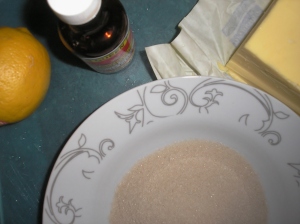 Enter vanilla baked pears. Not bears, I’m vegetarian, I’ve had this space for seven months and I still get asked if I’d like some baked bears, no thank you unless they’re tiny teddies.

Wow, I am so distracted. So, the lowdown is, make these. Pears are in abundance because it’s still winter (and aggressively so, it’s freezing!) so you can buy them and they won’t be too expensive. You don’t have to do much – peel, cut, and place the pears in a roasting dish. 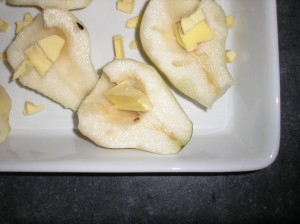 Rub vanilla extract or the insides of half a vanilla bean in sugar. Sprinkle it over with lemon juice and water. Dot with butter. 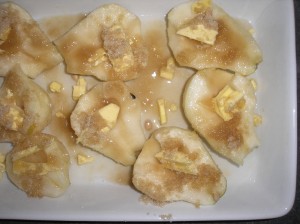 Put in the oven for longer than I did. Eat with whipped cream, ice cream and lots and lots of pan juices. Feel better about everything. 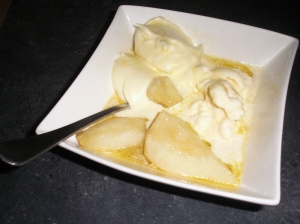 I did not follow this recipe exactly, my pears were ripe rather than underripe, I should have left them in for longer, I had no vanilla beans. This was amazing anyway. So just do it.

About 600g which is probably about 6 slightly underripe pears, whatever kind, peeled, halved, cored

If not, just rub the vanilla extract into the sugar.

Place the pears, cut side up, into a baking dish. Sprinkle with the sugar, dot with the butter, sprinkle with the lemon juice and water. Put the vanilla bean in the dish also, to make pear vanilla caramel juices (yum).

Try not to burn your mouth when you wolf it down because it’s so delicious.